Our favourite new ceiling and wall lights this spring

We’re shining a light on our favourite sconces and pendants of the season, including plenty of Danish design favourites. 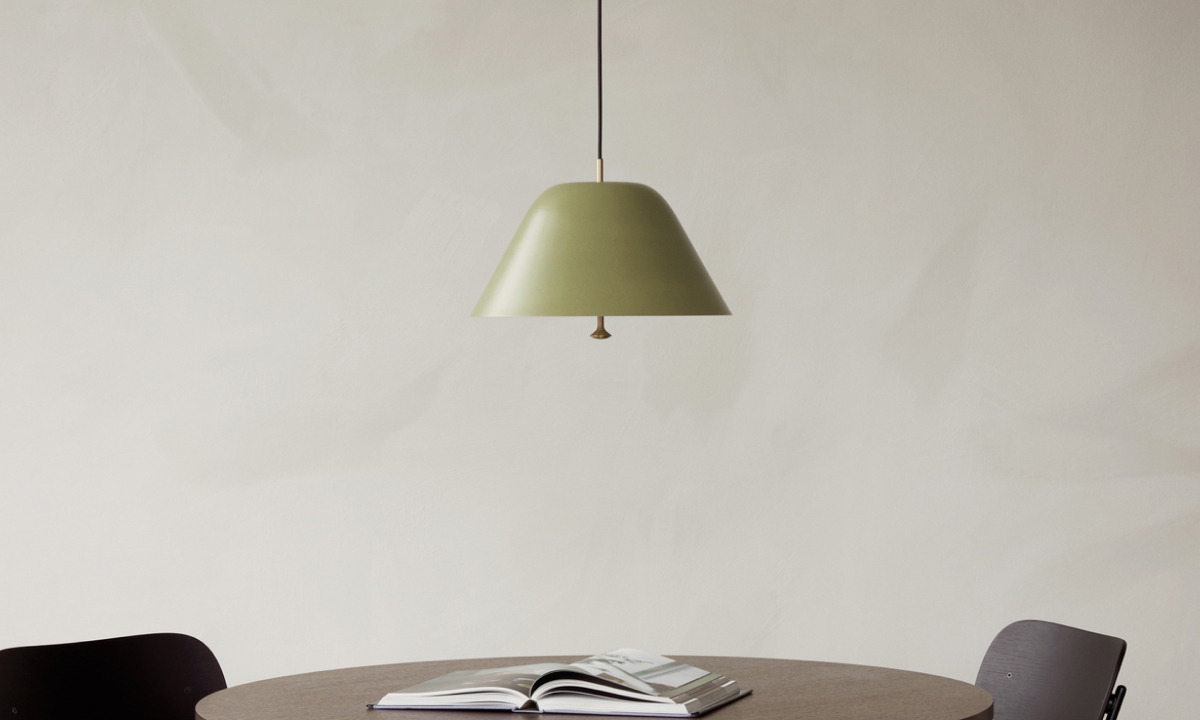 Our round-up of wall and ceiling lights is jam-packed with Denmark’s best and brightest, including fresh releases from Muuto, Gubi and Benny Frandsen. Among our top picks are pendants shaped like ice cream cones and modelled on Bauhausian ballet costumes, as well as a mid-century re-issue by architect Louis Weisdorf. This month’s floor and table lamp highlights are about to land as well, so we’ve got your next project covered from every angle.

An organically curved, aluminium shade distinguishes the Valentina Pendant, created by Spanish designer Alex Fernández Camps for local lighting brand Bover. The lamp has a rippled, bright white interior reminiscent of Japenese stone gardens, with a spherical LED light integrated seamlessly into its centre. This is offset against a smooth exterior that’s rendered in either grey, terracotta or a muted olive green.

Levitate Pendant by Afteroom for Menu

Stockholm design duo Afteroom opted for a more minimal aluminium shade for its Levitate Pendant, which Menu produces in two sizes and three colours – cream, black and sage green. The industrial metal is paired with hand-crafted details including a decorative, milled brass knob that protrudes from its centre like the clapper of a bell. Inset into the shade is a milky glass diffuser that emits light as a warm, ambient glow.

The gently tapered shape of an acorn informed this sconce, created by TAF Studio for Scandi design stalwart Muuto. Its mouthblown shade was sandblasted to create a semi-transparent finish so delicate, the brand delivers each light with a pair of gloves so that it can be mounted without tarnishing the surface. In contrast, its sturdy aluminium arm comes in various neutral shades as well as a bright, statement orange.

Gubi has introduced a new matt black and brass version of its Multi Lite Pendant, originally designed by architect Louis Weisdorf in the 70s. The seminal fixture hearkens back to the golden era of Danish design and is fully adaptable to the needs of a given space, as its two quarter-sphere shades can be moved by 180 degrees to direct light upwards, downwards or diagonally. This latest colourway also adds a new sense of depth and luxury to the design while its golden interior seems to glow from within.

The Drop Three Pendant almost never saw the light of day. Originally conceived by British manufacturer Original BTC in 2001, it was pulled from the collection because its sinuous design was too challenging to craft. Now, two decades later, the brand has finally released the bone china fixture, which is slip-cast in a mould that requires four hands to lift. The porcelain itself is left unglazed to emphasise its natural luminosity.

Luceplan founder Paolo Rizzatto has reprised his successful career as a lighting designer to create the Rizzatto 32 pendant for Danish brand Nuura. It features a rounded silhouette informed by the geometric costumes of the Triadic Ballet, which was staged by artist and Bauhaus teacher Oskar Schlemmer in the 1920s. The light is completely height-adjustable, making it suited for both private and larger public spaces.

Aytm’s Cycnus Pendant gets its name from the Ancient Greek word for swan and nods to the way the vertical cut-outs in its brim resemble the elegant sweep of a bird’s wings. Rendered in either black or taupe, the shade creates a play of light and shadows that’s further enhanced by its reflective brass hardware. The Cycnus range also includes a matching table, wall and floor lamp.

Cherry XS Pendant by Daniel and Emma for Petite Friture

Adelaide design duo Daniel and Emma designed this lamp for French brand Petite Friture to resemble an inverted ice cream cone in white powder-coated aluminium. A brass sphere dangles from its centre fixed to a plexiglass shade and acts as the proverbial cherry on top. The design is also available in a black version with an iridescent orb, as well as in a larger size.

Three perforated steel sheets are layered on top of each other and offset at a 180-degree angle to create this light by emerging German designer Frederik Kurzweg. Its punctured exterior is almost translucent and seems to morph and change its shape depending on the viewpoint while casting playful patterns onto the walls beyond. The lamp, manufactured by Normann Copenhagen, is dimmable and acts as a sculptural feature even when turned off.

This pendant is the result of a close and longstanding collaboration between Woud and designer Benny Frandsen, who both happen to be based in the small city of Horsens on Denmark’s Jutland peninsula. Perhaps best known for his iconic Ball light from 1969, Frandsen applied his characteristic eye for geometry to this three-headed fixture. Its sleek black finish and adjustable shades recall the spotlights of a theatre, providing direct and functional light. 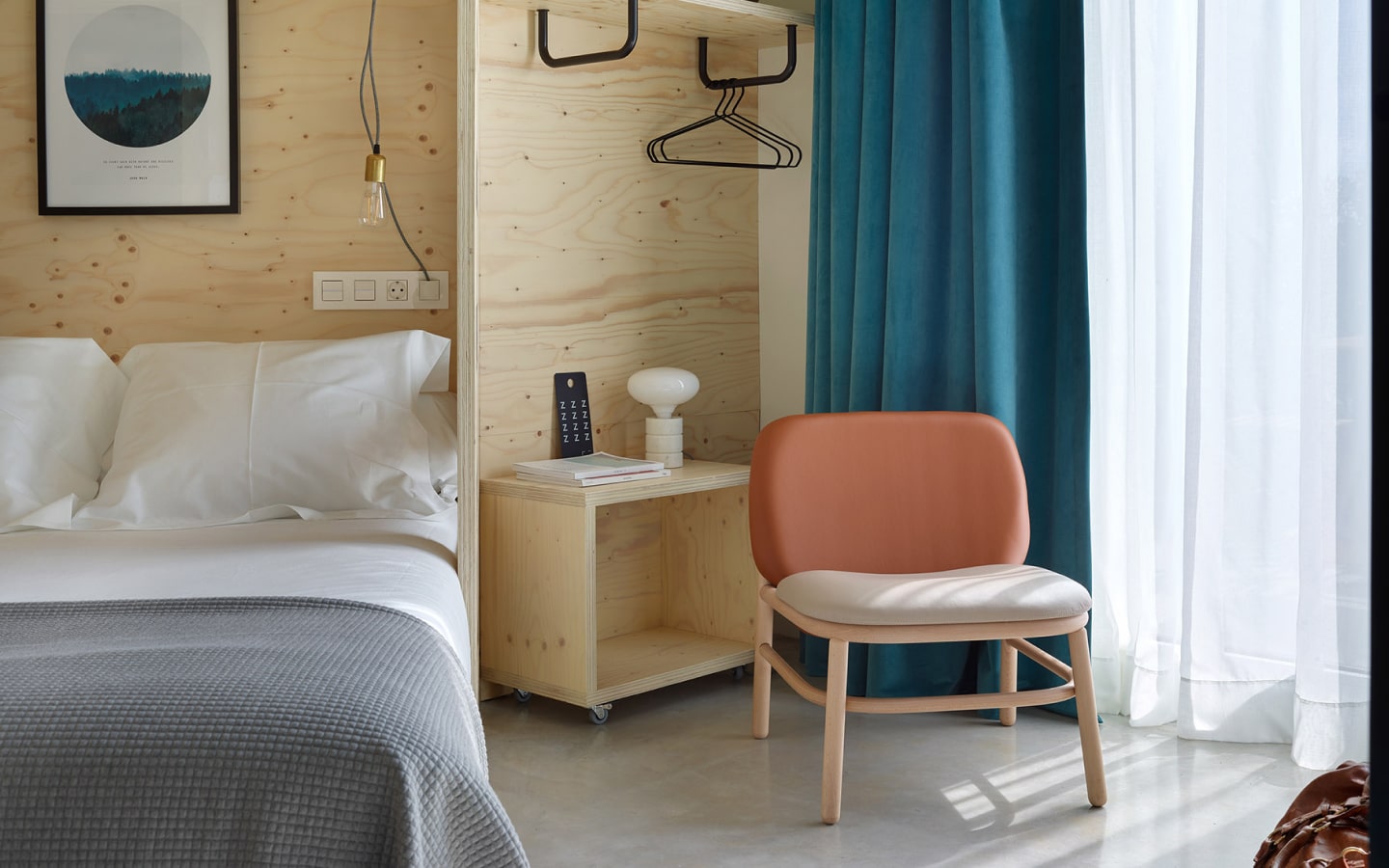 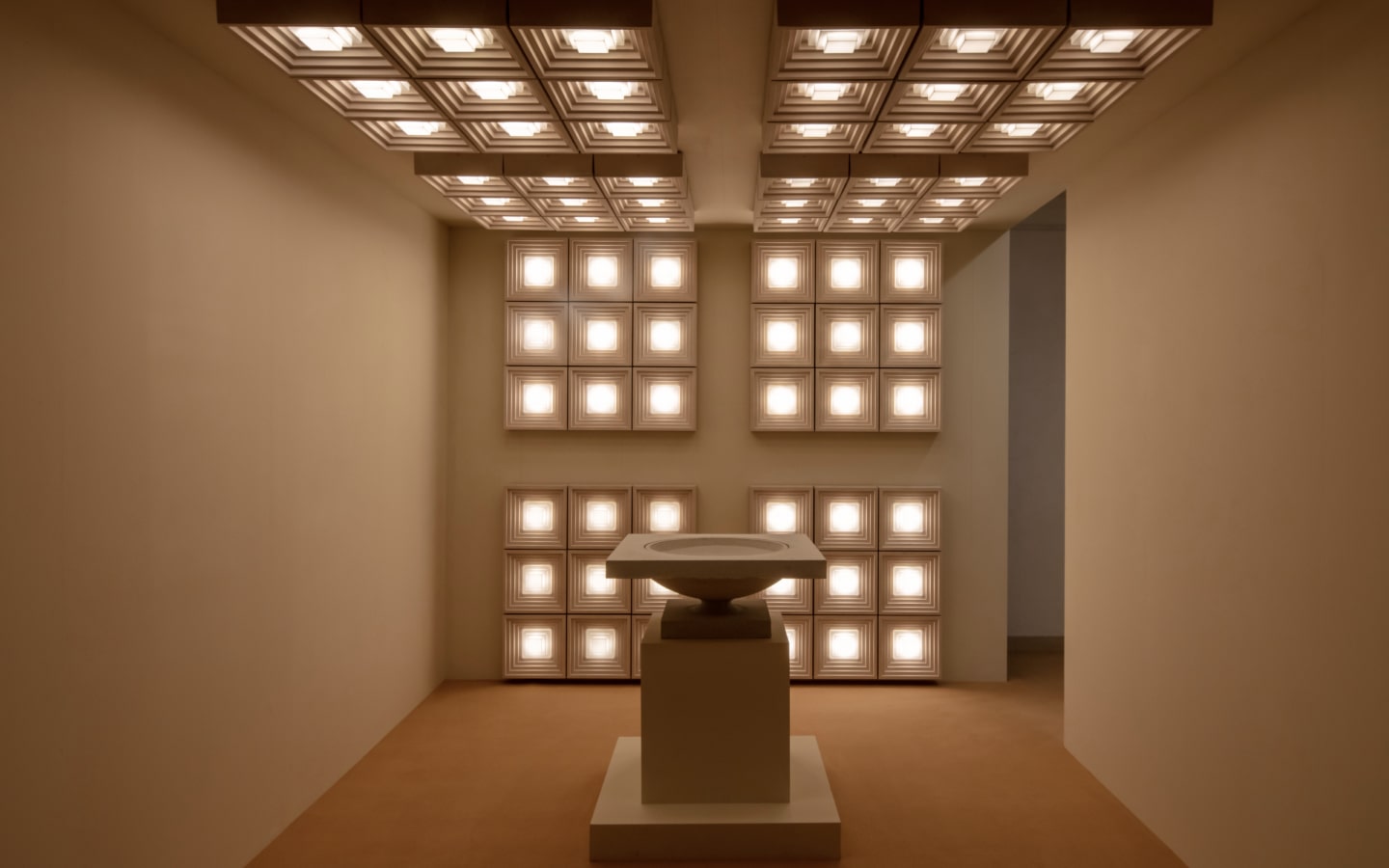 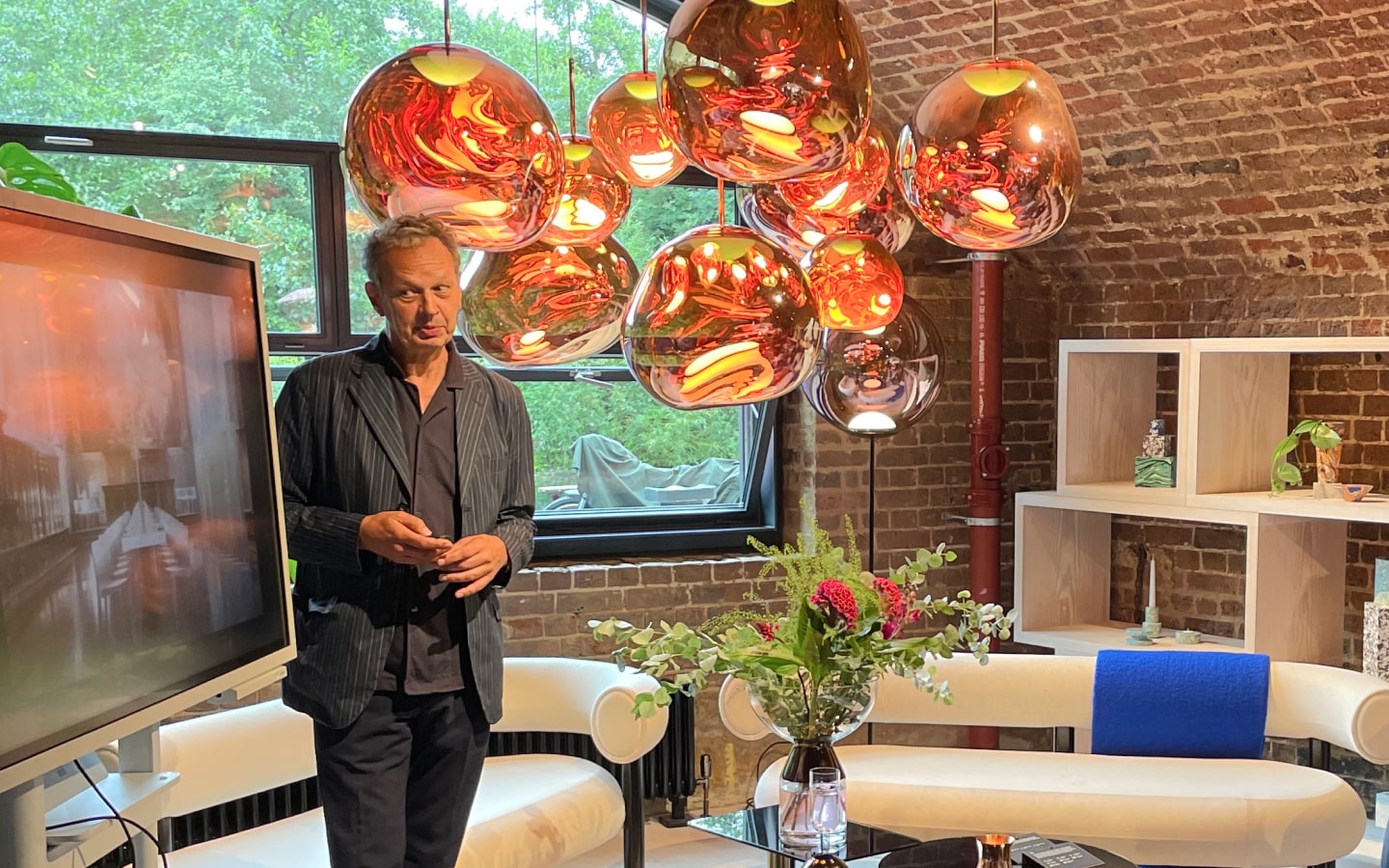 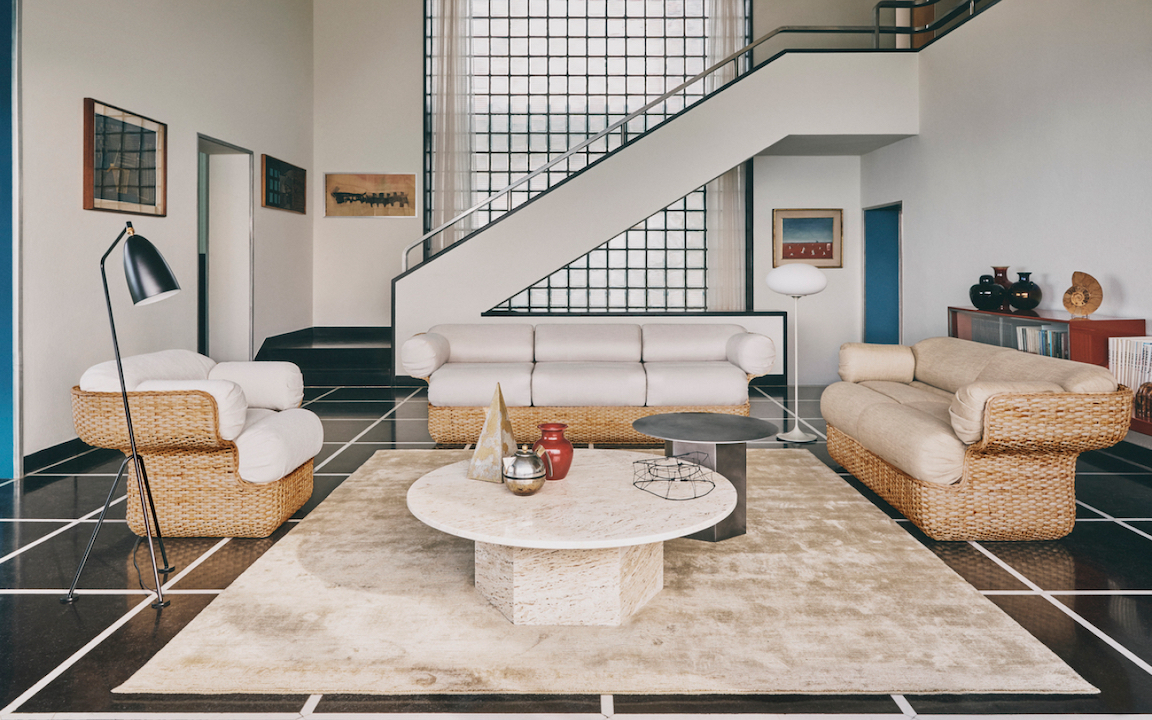